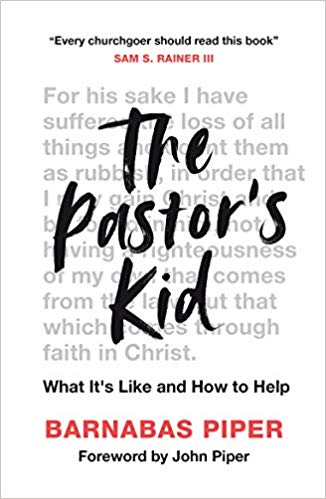 God has done other unexpected things too. I mention in the book how surprising it was to me the number of PKs who end up in church ministry. Well, in 2019 I joined their ranks – a move I never quite swore wouldn’t happen but that I did my best to avoid for all the reasons described in the pages of this book. I avoided it, that is, until God made it unavoidable.

This move, this calling, has made the words of this book that much more poignant to me. As I considered full time ministry, I had to weigh the reality of my calling and the realities it would introduce for my own kids. I needed to take my own words into account, my own experiences, my own struggles. My biggest concern, aside from my own worthiness to serve at my church, was how it would affect my kids. And that was scary.

But it was hopeful too. On the one hand nobody is prepared for vocational ministry, but on the other hand God had uniquely prepared me for it. . . just like He does so many other PKs. My experiences and struggles – our experiences and struggles – were a training ground that I had no desire to be on. But God knew they would ready me to serve and lead my church and my children better.

It’s one thing to write a book about ministry families as a sort of neutral bystander, where I was in 2014. There is safety in that distance and freedom to write and say pointed things with little blow back or cost. But I lost that safety when I stepped into a ministry role, and I think that is a good thing. I have to live my words now, to follow my own instructions, to be the sort of parent I call other pastors to be. That’s a bit terrifying.

It’s also exciting and encouraging. When I feel lost or like I’ve blown it as a minister-father I have my own words, my own standards, to revisit in order to find my way. My own words can hold me accountable and set a standard for me. My own pointed assertions are now pointed at me. I need that. And my kids need that from me too.

I hope you’ve enjoyed (or at least appreciated) listening to this book. I still hope and pray it lands in the hands of the PKs who need it most and in the hands of pastors who need it, whether you think you do or not. But now I am one of you, both groups, so the message of this book means more to me and now and hits closer to home than it ever has.

The Pastor’s Kid: What It’s Like and How You Can Help releases from The Good Book Company on June 1. This article is the new afterword that will be included in the audio book when it releases later in the summer.