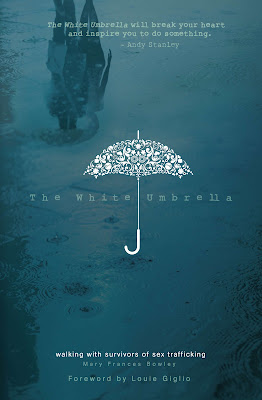 The White Umbrella: Walking with Survivors of Sex Trafficking by Mary Frances Bowley is a poignant, powerful book about caring for victims of sexual exploitation and trafficking. It is mostly stories of young women who suffered sexual atrocities but then were brought into the care of Wellspring Living, the author’s ministry. These stories aren’t from far-away places and foreign countries. They take place in the United States, our own back yard. As I read this book I was moved through the full range of emotions from extreme anger to brokenheartedness to wonder at the bigness of God’s grace to restore damaged people. It is an important book for the church to read both for awareness and to learn how to help.

Here are thirteen of the most significant quotes from the book.

1. “It’s horrifying and absurd to think that there are currently more slaves on earth than at any other time in human history.”

– Louie Giglio (from the foreword)

2. “Outside of my home, I lived a normal life. I made good grades, played sports, and had a few close friends. But on the inside, I felt dirty and worthless. I felt like I needed to hide. Sometimes I wanted to die. If anyone had paid attention, they might have noticed how the light in my face had been extinguished.”

3. “When God’s people come together to fight this good fight against the exploitation of innocence, the weight of oppression is exchanged for the weight of glory. The time has come to let our children be little girls once again. The time for freedom is now.”

4. “They were expected to earn $1,000 per night for their pimps, meaning they would be violated eight to ten times each evening. The average age of the girls lured into the Atlanta sex trade is twelve.”

6. “Most abuse victims are not easy to spot, and there is no stereotype for a sexual abuse victim. She does not necessarily have to come from a single-parent household with a low socioeconomic status. Her ethnicity does not make her trauma more likely, nor does the city where she lives. Instead, she could be a work associate, a child in Sunday school, or a kid at the neighborhood bus stop. Well-meaning people often act upon misguided assumptions about who is abused, yet so many of these hurting children are slipping right under their good natured noses. The reality is that there is no profile for these silent sufferers.”

7. “Remember, abuse is not always a choice. Girls who are survivors of sex trafficking are branded on the streets as prostitutes, sometimes quite literally as their pimp burns his mark on their neck or ankles. But they did not choose this work, and it is doubly tragic when these young women are branded once again by stigma and shame when they walk into the wider community, and even the church.”

8. “Jesus Christ came to set the captives free, and Christians have the amazing and humbling opportunity to be His hands and feet in this redemptive rescue. Christ calls us to reach out not only to those who are in physical captivity in brothels and bad situations, but also to those who are captives in their own minds to lies and distorted understanding that was formed by terrible experiences in their past.”

9. “We never know how long change will take or what roadblocks we’ll face, but God does. Sometimes it seems that our efforts are wasted, that what we’re attempting is beyond us. But when God is on our team, we have unlimited power.”

10. “It’s difficult for many of our girls to pray for themselves in the midst of restoration from horrific circumstances. What each one needs most is a warrior to pray for her, someone to carry her to the throne when she is too weak to carry herself.”

12. “I’m only asking for a consistent, authentic, and intentional relationship, along with time to prove that your life is what it seems and your intentions are pure. I need those things to be congruent, and you can’t show me that overnight.”

13. “To successfully stand with a woman throughout this process requires that we become like that relentless widow. We are called to plead her case before the throne of heaven and with the God who works justice, as well as to tirelessly plead for justice from others on this earth.”

You can learn more, download some great resources, and watch several of the ministry’s videos at http://www.thewhiteumbrellacampaign.com/.