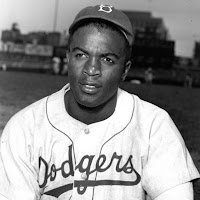 Hollywood has a history of creating feel good movies of racial reconciliation or overcoming. Think  Remember the Titans  or  Glory Road. Those are both Disney flicks, so of course they had to be be family friendly. Now Warner Brothers is bringing their offering to the big screen.

42, the story of  Jackie Robinson, will release in April. Jackie’s story wasn’t one of of happy endings and feeling good. It is one of torture, perseverance, pain, and success. Between death threats, racial slurs so ugly even Hollywood won’t be able to include them, and the pressure of an entire Jim Crow system sitting on his shoulders he managed a hall of fame career even though he got a late start at age 28. (Before that he was busy becoming the first athlete in UCLA history to letter in 4 varsity sports, enlisting in the army, being promoted to 2nd lieutenant, getting honorably discharged for his opposition to racial discrimination, and then going on to dominate in the Negro leagues for a year.) Jackie Robinson is one of the strongest men ever to play professional sports, and I hope this move depicts that. Anything less would be a dishonor to him and his legacy.

Now, Warner Brothers, when will we get the Earl Lloyd story?