I recently finished reading A Long Obedience in the Same Direction by Eugene Peterson. It was one of those perfect intersections of book and season of life that happen so rarely. I will share a whole post of quotes later, but this portion on hoping–what it is and isn’t–has been life preserver, a corrective, and light for me. So often hoping seems vain or meaningless or passive or claustrophobic or foolish. Not so. Hoping is none of those things, and Peterson paints a magnificent picture of what it is. 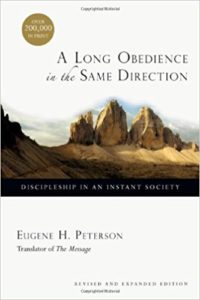 Hoping does not mean doing nothing. It is not fatalistic resignation. It means going about our assigned tasks, confident that God will provide the meaning and the conclusions. It is not compelled to work away at keeping up appearances with a bogus spirituality. It is the opposite of desperate and panicky manipulation, of scurrying and worrying.

And hoping is not dreaming. It is not spinning an illusion or fantasy to protect us from our boredom and our pain. It means a confident, alert expectation that God will do what he said he will do. It is imagination put in the harness of faith. It is a willingness to let God do it his way in his time. It is the opposite of making plans that we demand that God put into effect, telling him both how and when to do it. That is not hoping in God but bullying God.

A Long Obedience in the Same Direction, Chapter 12