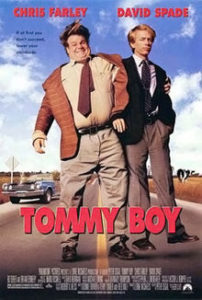 A few years ago I was with some college students and I quoted this movie. I don’t remember which quote, there are so many after all. All I was met with was blank stares. They did not know the movie, and they barely knew Chris Farley! I was heart broken for their sake and because in that moment I felt very, very old. Since that time I’ve learned that what was an iconic comedic film of my youth, a movie that has shaped both my vernacular and some friendships, has been missed by many of my peers as well. A travesty, I say! A shame! A sham! This must be remedied forthwith. And anyone who refuses to take part in this glorious laugh fest, well, their head is made of thick candy shell.

Pistol: The Life of Pete Maravich by Mark Kriegel 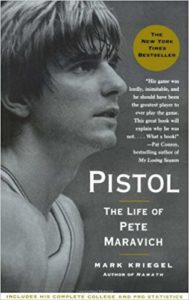 When a fascinating, enigmatic cast of characters encounters a gifted biographer something special happens. This is just such an instance. I’m a committed basketball fan, but I knew few details of Pete’s life and almost nothing of his father, Press Maravich, either. Their combined, symbiotic and parasitic relationship is heartbreaking and fascinating. To read a non-Christian author describe Pete’s transformation when he met Christ is equally fascinating – almost like reading about him meeting a unicorn. Kriegel finds it magnetic, but not totally believable. The lives of Pete and Press Maravich were captivating and tragic, with the highest of highs and the lowest of lows. They were transcendent in their craft of basketball and struggled at nearly everything else. And Kriegel captures it magnificently.

“If Trouble was Money” performed by Gary Clark, Jr.

A classic blues song performed by a magnificent blues musician will absolutely wash all your blues away. Turn this one all the way up.