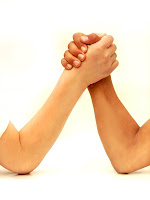 In the world of media, two things sell well: good stories and extreme viewpoints. It makes sense that good stories sell, but why are extreme and polarizing stances so popular? Why do the most divisive voices garner the most attention? There is something about bombast and bluster that draw people like moths to a flame—and often with the same results.

Extremism sells because it has a certain charisma. It is bold, willful, stark, concrete, and risky. It sells because it is so blatant that even those who are opposed consume it just so they can masticate and expectorate. And it sells because so many people are easily swayed by volume instead of reason, confidence instead of thoughtfulness, boldness instead of rightness. This is just as true within the church as it is in broader culture.

We in the church are as culpable as anyone of our own false dichotomies and extreme views.
. . .