From my weekly article at Worldmag.com 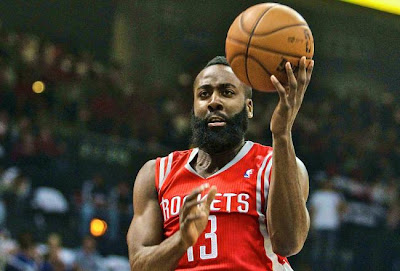 In a superstar-driven league like the National Basketball Association it is a big deal when a star player switches teams. Just before this young NBA season began, the Oklahoma City Thunder traded one of their “big three,” James Harden, to the Houston Rockets. Harden is a burgeoning star and was one of the keys to the Thunder having the most wins in the league last season on their way to the NBA Finals, where they lost to the Miami Heat. Harden was also the third wheel on the team, a sub-star instead of thesuperstar. And on an NBA team, only so many stars get paid the big money and gain the most attention. So Oklahoma City traded him to a team willing to shell out the $85 million Harden’s abilities demand. Now he is “the man” in Houston.

But he is the star on a team with a significantly less chance for success. Instead of being in the running for a championship, the Rockets likely will be scrapping just to make the playoffs, unless Harden is truly transcendent. This situation is not unlike what faced Dwight Howard when he played for the Orlando Magic, or LeBron James when he was with the Cleveland Cavaliers. While both of them had some success with mediocre surrounding casts, they were ultimately throttled in their efforts to win a championship. And so both of them orchestrated their way to teams with significantly more talent.

When the move for individual status and acclaim requires forsaking the very thing the game is played for—a championship—is it worth it?