All of us have heard this phrase, likely said it. It is a common enough wisdom that if someone is troubled, stressed, upset, or angry they should just get off their chest. Just vent a little, blow off some steam, get it all out. There, now doesn’t that feel better?

But just where do our problems go once they’re off our chests? And by spewing them out, do we actually get rid of them at all? 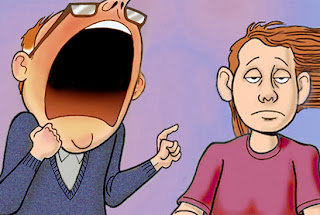 It seems to me, though, that getting something off your chest usually just dumps it straight onto someone else’s. When I vent I may be temporarily relieving emotional pressure in me, but I’m just building it up in others. Venting the poison out of me just fouls the air for those around. People assume that to get something off their chest is to make it go away. In reality it makes the issue grow. It goes from my problem to my problem and your problem.
The problem with the whole idea of getting something off your chest is that it is aimless; it seeks to dump a problem elsewhere and leave it. It isn’t a solution. It isn’t a request for help; It isn’t trying to help someone else. Speaking our problems or frustrations doesn’t eliminate them at all, it just sneezes the virus onto others.
Getting things off my chest is a fruitless effort with a thoughtless basis. It is more escapism than actual conflict resolution or problem solving. It requires no thought or aim or goal as to the response a problem requires. Instead it just leaves the ugly problem for all to see and lets it fester. It is an expression of a lack of self-control. Ultimately, it’s selfish and lazy.
The solution isn’t to do the opposite, though. Keeping all those stresses or burdens to ourselves is simply to bottle them up. This just leads to internal breakdown or external explosion which are just as messy as the “getting it off my chest” would have been. No, the solution is to share a burden rather than dump it.
There is a distinct difference between blowing off steam or getting things off my chest and sharing that same pressure or burden with someone prepared to carry it with me or for me. This person clears the poisoned air instead of being infected by it. He willingly takes up my problem to carry it rather than feeling like I just heaped it on him. He has willfully committed to be a receiver of my struggles, so he never feels booby trapped or ambushed by my problems.
Likely, all of us have fallen into the trap of unloading our problems onto some unsuspecting and unwilling bystander. By trying to improve our emotional state we have degraded someone else’s. It would be beneficial to rethink this bit of cultural wisdom. Because cultural wisdom is rarely wisdom at all.