Recently the news broke of the suspensions of two coaches from the New Orleans Saints, Gregg Williams and Sean Payton, for their role in paying players bounties for knocking opposing players out of the game. I was struck by the inconsistency, even hypocrisy, from the NFL’s directorate about “player safety” and the ethics surrounding it. I penned an open letter to Roger Goodell at WorldMag.com this week. Here is an excerpt. 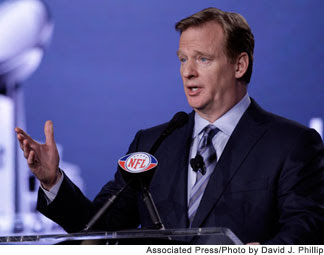 I feel I must point out to you something that I have been trying to teach my 6-year-old daughter: Covering your eyes may keep you from seeing something, but it doesn’t make anything invisible. No matter how much you defend the “safety” of the players, football is not a safe game.

When the news broke that Gregg Williams, the former defensive coordinator for the New Orleans Saints, had been putting monetary bounties on opposing players I was horrified. To pay already-well-paid players extra to knock an opposing player out of a game is atrocious. The fact that the upper levels of the team’s coaching staff and management approved this bounty system makes it even worse.

I am glad you suspended Williams indefinitely and Sean Payton, the head coach, for a full season. They cheated.
. . .

Those coaches rewarded their players for risking the careers of others by acting outside the rules of football. But you and I both know that the very game itself risks the health and careers of players. You can pontificate as much as you like about “caring for the safety of players,” but a game that requires behemoth men encased in armor to repeatedly knock each other to the ground with a running start cannot, in any sense, be called “safe.”

You can read the full letter HERE.