As much as I might wish this to be literally true about cats, the saying is a warning about the dangers of curiosity. Curiosity is often deemed to lead people into precarious places and down risky paths. It gets us into trouble and tempts us to stick our noses where noses have no business being.

When we look around at the world, especially from a Christian perspective, it looks like a dangerous place. It’s unjust, unclean, and poisonous in millions of ways. In such a scary and complicated world, it seems like curiosity only serves to lure us out into the danger, and possibly to an untimely demise.

While the world is a risky place, it’s important to remember that we aren’t cats. We don’t have to go through every open door and climb to the highest point of everything. We don’t have to pounce on everything that moves. We have minds and souls, not just animal instincts. While curiosity can be a threat to the life of a cat, for Christians it ought to be a life-enhancer.

Curiosity is the strong desire to know and to learn. When Christians are curious, they grow in knowledge and their ability to rightly discern situations.

Discernment is the ability to judge what is right and wrong, what is good and bad. Christians are called to dwell on things that are honorable, just, pure, lovely, and commendable (Phil. 4:8), but how do we identify those things? In our world it can be hard to tell; almost nothing is black and white. In nearly every interaction we must be able to discern what is pure and lovely, what is honorable and true, and what is not.

Curiosity drives us in this process. We wonder and ask from a place of truth-seeking. Our curiosity, if godly, isn’t the thing that leads us into sin. It’s the thing that helps us recognize and avoid it, while celebrating the things that are good.

Jesus calls his followers to be in the world as he was, but not of the world. We’re to be of his kingdom, defined by it and living according to its standards, while loving our neighbors as ourselves. To love our neighbors we need to learn about them and their different cultures. We cannot fulfill this mission without being curious.

Curiosity and the discernment it begets enable us to plunge into culture, soak in it, but not be defined by it. It helps us love our world without being destroyed by it.

But isn’t the world still dangerous? Won’t all this curiosity get us into trouble? The world can often seem like an evil tempter, beckoning us to our downfall. It’s scintillating and intoxicating, fogging our minds and numbing our senses. Think of Vanity Fair in The Pilgrim’s Progress, or how the White Witch’s Turkish delight so entranced Edmund in The Lion, the Witch, and the Wardrobe.

No question, the evils of the world are a powerful gravitational pull for our sinful hearts. To say we’re to be curious about the world denies none of this. Neither does it downplay the risks and dangers.

Instead, proper curiosity about the world opens our eyes to the wiles of the world and provides the discernment we need to fight against them. Curiosity about God anchors us in God’s strength as we learn more, seek more, and see more of him. Curiosity drives us to seek out truth and discern right from wrong. Curiosity isn’t a dangerous trap; it’s the thing God uses to make us wise so we can avoid the traps of sin and live freely for him. 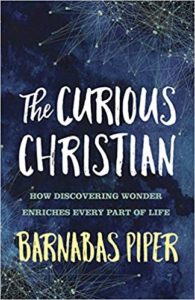 For more on  curiosity, the Christian life, and interaction with culture check out my book The Curious Christian: How Discovering Wonder Enriches Every Part of Life

This article was originally published at The Gospel Coalition and is used with permission.