Curiosity is a concept that can be hard to quantify or qualify and even hard to justify. Yet I wrote a whole book about, The Curious Christian: How Discovering Wonder Enriches Every Part of Life. Quotes like the ones that follow were part of what shaped, influenced, and flavored my thinking and writing, which is why they all ended up scattered throughout the book. You’ll see scientists, journalists, theologians, politicians, CEOs, and more represented. That’s because Curiosity affects every part of thinking and life.

The ability to retain a child’s view of the world with at the same time a mature understanding of what it means to retain it, is extremely rare – and a person who has these qualities is likely to be able to contribute something really important to our thinking.
― Mortimer J. Adler

When I was ten, I read fairy tales in secret and would have been ashamed if I had been found doing so. Now that I am fifty, I read them openly. When I became a man I put away childish things, including the fear of childishness and the desire to be very grown up.
– C.S. Lewis

The modern view seems to me to involve a false conception of growth. They accuse us of arrested development because we have not lost a taste we had in childhood. But surely arrested development consists not in refusing to lose old things but in failing to add new things? . . . Where I formerly had one pleasure, I now have two.
– C.S. Lewis

It is usual to speak in a playfully apologetic tone about one’s adult enjoyment of what are called ‘children’s books.’ I think the convention a silly one. No book is really worth reading at the age of ten which is not equally (and often far more) worth reading at the age of fifty – except, of course, books of information. The only imaginative works we ought to grow out of are those which it would have been better not to have read at all.
– C.S. Lewis 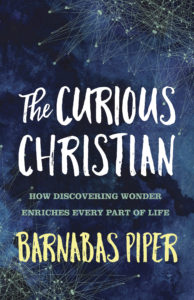 Let our teaching be full of ideas. Hitherto it has been stuffed only with facts.
– Anatole France

Without leaps of imagination or dreaming, we lose the excitement of possibilities. Dreaming, after all is a form of planning.
– Gloria Steinem

Reality leaves a lot to the imagination.
– John Lennon

Creativity is just connecting things. When you ask creative people how they did something, they feel a little guilty because they didn’t really do it, they just saw something. It seemed obvious to them after a while.
– Steve Jobs

We’re trying to leverage everything we can to be better at what we do and what God has called us to do.
– Andy Stanley

True does not mean factual (though it may be factual); true means accurately reflecting human experience.
– Daniel Taylor

Curiosity about life in all of its aspects, I think, is still the secret of great creative people.
– Leo Burnett

When you lose your curiosity you basically have started to give up on life.
– John Maxwell

I think, at a child’s birth, if a mother could ask a fairy godmother to endow it with the most useful gift, that gift would be curiosity.
– Eleanor Roosevelt

It is a miracle that curiosity survives formal education.
– Albert Einstein

You can teach a student a lesson for a day; but if you can teach him to learn by creating curiosity, he will continue the learning process as long as he lives.
– Clay P. Bedford

A sense of curiosity is nature’s original school of education.
– Smiley Blanton

We never know whom we marry; we just think we do. Or even if we first marry the right person, just give it a while and he or she will change. For marriage, being [the enormous thing that it is] means we are not the same person after we have entered it. The primary problem is . . . learning how to love and care for the stranger to whom you find yourself married.
– Stanley Hauerwas

Until our thoughts of God have found every visible thing and event glorious with his presence, the Word of Jesus has not yet full seized us.
– Dallas Willard

Little minds are interested in the extraordinary; great minds in the commonplace.
– Elbert Hubbard

I think the key to the future is curiosity. I look at the people I admire most and they’re curious people, they’re open, they’re interested, they haven’t arrived.
– Carey Nieuwhof

He who can no longer pause to wonder and stand rapt in awe, is as good as dead; his eyes are closed.
– Albert Einstein

I learn from as many people all the time, anywhere, as I can.
– Craig Groeschel

Books are the quietest and most constant of friends; they are the most accessible and wisest of counselors, and the most patient of teachers.
– Charles William Eliot

We were successful because we were curious guys.
– Paul McCartney

We should, to begin with, think that God leads a very interesting life, and that He is full of joy. Undoubtedly He is the most joyous being in the universe. The abundance of His love and generosity is inseparable from His infinite joy. All of the good and beautiful things from which we occasionally drink tiny droplets of soul-exhilarating joy, God continuously experiences in all their breadth and depth and richness.
– Dallas Willard.

A lot of leaders stop in their growth because they lose their curiosity.
– John Maxwell

People say: idle curiosity. The one thing that curiosity cannot be is idle.
– Leo Rosten

You must have an enormous appetite for humanity and for life and for the world. You really have to feel like you cannot fill yourself up enough with this amazing place we live in. If you have that feeling, like sincerely have it, you’ll do ok.
– Sebastian Junger

I think curiosity is everything. It’s the underlying motivation to learn. It’s a characteristic where you acknowledge you don’t know everything and perhaps there are better ways to do things. I’m always nervous about people who aren’t curious about anything in the world.
– Simon Sinek

Everything in life conspires against our sense of wonder: age, experience, our jobs, even our church.
– Andy Stanley

Curiosity will conquer fear even more than bravery will.
– James Stephens

Curiosity is, in great and generous minds, the first passion and the last.
– Samuel Johnson

What made Mr. Merrill infinitely more attractive was that he was full of doubt ; he expressed our doubt in the most eloquent and sympathetic ways. In his completely lucid and convincing view, the Bible is a book with a troubling plot, but a plot that can be understood. . . Although he knew all the best— or, at least, the least boring— stories in the Bible, Mr. Merrill was most appealing because he reassured us that doubt was the essence of faith, and not faith’s opposite.
– A Prayer for Owen Meany

Love is curiosity sometimes. Concentrated wondering about the other one.
– Kij Johnson

The best leaders learn from anything and anybody . . . The greatest leaders are the curious ones.
– Louie Giglio

“We will never be of much use in this life until we’ve developed a healthy obsession with the next.”
– Sam Storms

It would be very difficult to draw a line between holy wonder and real worship; for when the soul is overwhelmed with the majesty of God’s glory, though it may not express itself in song, or even utter its voice with bowed head in humble prayer, yet it silently adores.
– Charles Haddon Spurgeon

And one thing I know about curiosity: it’s democratic. Anyone, anywhere, of any age or education level, can use it.
– Brian Grazer

You can take a free (and fast) evaluation to see just how curious you are at CuriousChristianBook.com.