The Advantage by Patrick Lencioni is my favorite book when it comes to organizational leadership.I think it is Lencioni’s best book over all, which is saying something considering the number of remarkable leadership books he’s written. There are other books to help the soul of the leader or the communication of the leader, but this one is the best I have seen on creating a healthy organization – church, business, or otherwise. Here are the best quotes from it. If you have not yet read The Advantage you absolutely ought to. It is incredibly helpful and insightful and will diagnose so many of the issue plaguing your organization right now. 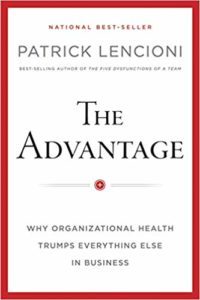 “Organizational health is so simple and accessible that many leaders have a hard time seeing it as a real opportunity for meaningful advantage. After all, It doesn’t require great intelligence or sophistication, just uncommon levels of discipline, courage, persistence, and common sense.”

“Organizational health permeates so many aspects of a company that isolating any one variable and measuring its financial impact is almost impossible to do in a precise way.”

“At its core, organizational health is about integrity.”

“An organization has integrity – is healthy – when it is whole, consistent, and complete, that is, when its management, operations, strategy, and culture fit together and make sense.”

“An organization that is healthy will inevitably get smarter over time.”

“Leaders who pride themselves on expertise and intelligence often struggle to acknowledge their flaws and learn from peers.”

“The healthier an organization is the more of its intelligence it is able to tap into and use.”

“The financial cost of having an unhealthy organization is undeniable: wasted resources and time, decreased productivity, increased employee turnover, and customer attrition.”

“Teamwork is not a virtue. It is a choice.”

“Inquiry is rarer and more important than advocacy.”

“No one on a cohesive team can say Well, I did my job. Our failure isn’t my fault.”

“When leaders preach teamwork but exclusively reward individual achievement, they are confusing their people and creating an obstacle to true team behavior.”

“When members of a team willingly acknowledge their weaknesses to one another, they give their peers tacit permission to call them on those weaknesses.”

“The fear of conflict is almost always a sign of problems.”

“When we avoid necessary pain, we not only fail to experience the gain, we also end up making the pain worse in the long run.”

“When leadership team members avoid discomfort among themselves, they only transfer it in far greater quantities to larger groups of people throughout the organization they’re supposed to be serving. In essence they leave it to others below them to resolve issues that really must be addressed at the top.”

“Nowhere does the tendency toward artificial harmony show itself more than in mission-driven non-profit organizations. People in those organizations tend to have the misguided idea that they cannot be frustrated or disagreeable with one another. What they’re doing is confusing being nice with being kind.”

“The more comfortable a leader is holding people accountable, the less likely she is to be asked to do so.”

“Firing someone is not necessarily a sign of accountability, but is often the last act of cowardice for a leader who doesn’t know how or isn’t willing to hold people accountable.”

“Conflict is about issues and ideas, while accountability is about performance and behavior.”

“There is no getting around the fact that the only measure of a great team – or a great organization – is whether it accomplishes what it sets out to accomplish.”

“Great teams ensure that all members, in spite of their individual responsibilities and areas of expertise, are doing whatever they can to help the team accomplish its goals.”

“Most mission statements have neither inspired people to change the world nor provided them with a accurate description of what an organization actually does for a living.”

“Alignment and clarity cannot be achieved in one fell swoop with a series of generic buzzwords and aspirational phrases crammed together.”

“An organizations core purpose – why it exists – has to be completely idealistic.”

“An organization that has properly identified its values and adheres to them will naturally attract the right employees and repel the wrong ones.”

“It is important that leaders prevent against accidental values taking root because they can prevent new ideas and people from flourishing in an organization.”

“An organization’s strategy is simply its plan for success . . . Every single decision, if it is made intentionally and consistently will be part of the overall strategy.”

“Most organizations have too many top priorities to achieve the level of focus they need to succeed.”

“On a cohesive team leaders are not there simply to represent the departments that they lead and manage but rather to solve problems that stand in the way of achieving success for the whole organization.”

“Too many leaders come to meeting with the unspoken assumption that they are there to lobby for and defend their constituents.”

“Great leaders see themselves as Chief Reminding Officers as much as anything else.”

“For all the talk about hiring for fit, there is still too much emphasis on technical skills and experience when it comes to interviewing and selection.”

“The single most important reason to reward people is to provide them with an incentive for doing what’s best for the organization.”

“The vast majority of employees, at all levels of an organization, see financial rewards as a satisfier not a driver.”

“Almost no employees leave an organization where they are getting he levels of gratitude and appreciation that they deserve.”

“Bad meetings are the birthplace of unhealthy organizations.”

“At every step in the process, the leader must be out front, not as a cheerleader or a figurehead, but as an active, tenacious driver.”

“People who lead healthy organizations sign up for a monumental task – and a very selfless one.