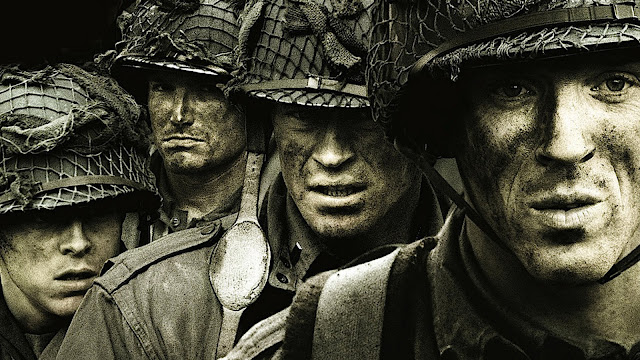 I have been watching Band of Brothers

, the HBO mini series based on the experiences of Easy Company and the 101st Airborne in Europe during World War 2. It is a remarkable series, one of the best stories I have ever watched for a dozen reasons. One of these is the way every man continually stepped up to do his duty, and, if the situation demanded it, the duties of a comrade or even commanding officer. Time and again, a lower ranking soldier filled a void left by an officer who was either promoted or a casualty. And the 101stAirborne forged on, battle after battle, no matter what.
The more an organization – military, business, ministry, or sports team – depends on a single person the more it is at risk. At smaller organizations this is often necessitated and on a sports team often the talents of a particular player are irreplaceable. Oddly, though, in larger organizations where such a structure could be avoided it happens by choice (or habit). All the decisions run through the CEO or some other hierarchical process that creates a bottle neck, so even though the organization has more resources it doesn’t actually utilize them.
Another account from World War 2 comes from the opposite side of the world, in the Pacific arena. (I believe it is from the book Flags of Our Fathers, by James Bradley – another fantastic story.) It is the story of how a beleaguered U.S. military force often gained an advantage over the Japanese – because of chain of command. Every man in an American unit was trained and drilled and drilled and trained to know the process, protocol, and objective of every mission. So no matter what happened to the officers, the next man in line could carry out the duties necessary to complete the mission. For the Japanese, though, the totalitarian, dictatorial style of military leadership created highly trained, passionate soldiers who would do anything for their cause but were utterly dependent on their superiors for direction. So if a Japanese officer was killed the morale and the mission of the remaining soldiers was undermined. The American soldiers learned quickly that a key to victory was to take out the Japanese officers, leaving their underlings directionless.
This is a perfect illustration of the risk that lies in depending too much on a single person in any organization. The military has it’s chain of command. Sports have backups and second teams. Churches and businesses have. . .what, exactly? Often they have employees who are trained in a single role and unaware of what it takes to do another. They know the demands of their job but are not clued in to the greater mission and cause and the specific strategy being used to accomplish it. And so when a leader leaves there is a gaping hole with nobody prepared to fill it. And the mission suffers.
Rather than such a fiasco, organizations should clearly emphasize the mission and the strategy to all employees so that everyone knows where they are going and what they are doing. Leaders should delegate and share tasks so that those underneath them can gain an understanding, bit by bit, of what it takes to be the lead “officer”. And employees at all levels should be trained in skills and duties outside of their specific role so that when a void occurs in staffing someone already part of the mission is prepared to fill it. Employees need opportunities to be part of a variety of tasks and responsibilities so they can gain understanding, empathy, and the necessary skills to be part of the entire mission.
Ultimately, every employee ought to seek to be irreplaceable by being multi-skilled and mission focused. He should be able to fill multiple needs, even if it’s just temporarily. And every employer or leader should create a context in which any employee can be replaced at any time by a fellow member of the team should the need arise. Instead of creating limited automatons, leaders should be forming multi-talented leaders-in waiting as much as they can.