I have a college student who works part time in my office. Last week he came into the office sounding like he swallowed a frog and his nose was dripping like a public restroom faucet. He was a contagious mess. He told me that some sort of cold bug had swept his dorm floor and they were all sick. In that living situation there’s nothing do be done. Close quarters mean shared germs no matter what. They couldn’t have avoided each other if they had wanted to. And I’m sure they did want to.
Many Christians, though, act as if this is the proper way to avoid sin, to avoid people who “have” it like it’s an infection or a bug. But sin isn’t a bug to catch. 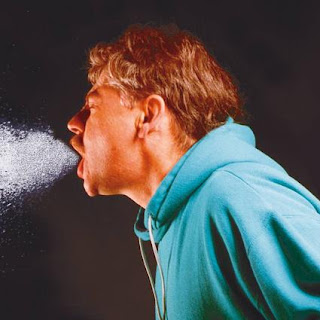 So many Christians live in cultural quarantine. They shut themselves off from what they see as sinful influences. They avoid “bad” people and couldn’t possibly be seen near certain places. They talk about those people and places like they are disease carriers – “We can’t have them around” or “We couldn’t go nearthere.” It’s as if these folks or locales carry the black death or something. These Christians act like someone can sneeze sin onto them – that they will catch the bad decisions and guilt of another just through physical proximity.
But what does his shunning communicate to those we have labeled as disease carriers – or like they did with lepers in the bible, called them unclean? It does exactly that – it shuns. Christians think they are unclean and it comes across that way. Not exactly the ideal way to draw people to Jesus. But sin is not an infectious disease.
We don’t “catch” sin from the outside. It’s in us from birth. We are sin carriers. It’s only by the grace of God that we can become immune to this virus that lives in us. It’s only be grace that we can live a life without its symptoms oozing and coughing and wheezing out of us to spray all over those around us. Because of the work of Christ we are able to choose whether or not to sin. It is a decision – one that we often have a very hard time making, but a decision nonetheless.
Sin is a theology too. It is a belief, or lack thereof, in the goodness and work of Jesus. It is this theology – this belief – that both forms and informs our decision making and drives us either to be like Jesus or not.
So, when we are around obvious sin, those people and places we are so inclined to shun, we can NOT catch their sin. We can choose their sin, but that is a matter of decision, of belief, of theology. If we hold fast to Jesus there is no risk of someone else’s sin invisibly taking hold of us – like a flu bug might. How freeing is that! We no longer have to keep our distance or live in cultural quarantine. We can engage those people with grace and freedom, without fear. Because we are near Jesus we can be near to anyone without worrying that they will make us more like them than like Him.