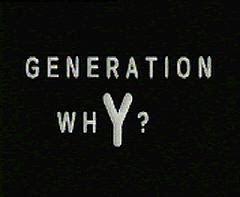 Having been born in 1983, I am of the Millennial generation, or Generation Y, so it is interesting to see various statements propagated regarding Millennials. One of these that has struck a dissonant chord with me is this: “Millennials don’t respect authority” (or some variation of that). While I can see why various commentators might say that, I think it is untrue. Maybe my disagreement is a disrespect of their authority, though. Oh well, here goes.
Millenials don’t disrespect authority (some do, sure, but as a whole); we disrespect authoritarianism. What I mean by this is that Millenials value direction, leadership, and the authority that is based in know-how and experience. But we resist the type of authority that originates in a “because I said so” attitude. We want to know why things should be done a certain way. Why does it make more sense to do things one way than another? Why should we keep doing things the way they have always been done? Why does the boss’s opinion matter more than mine even if he isn’t right?
This attitude does have its shortcomings. It does lend itself to contrarianism (guilty) and it must be tempered by the common sense to shut up and just do the work at some point. It can border on disrespect if it is voiced poorly or too often. But it isn’t a bad thing in itself.
It’s a forward-thinking attitude. We want leaders who will take us somewhere not authority figures who will keep us where we have been.  We will follow people of passion, intelligence, and vision. But we won’t follow someone, or their ideas, just because we’re told to. We want authorities over us who will give reason and explanation and direction, not just orders or propositional statements. We might acquiesce outwardly to certain authority figures because that’s what a job or a role calls for, but we followleaders who are leading not demanding.
Millenials, be humble people who respond well to authority. But don’t stop asking questions and prodding the authorities in your life to lead and reason and think. Shut your mouths when you ought to. Do the grunt work when it’s required. But ask questions. Give ideas. Be the energy in your family, your church, or your organization. Be followers who spur your authorities.
Bosses and superiors, be authority figures but don’t be authoritarian. We won’t follow you because we’re supposed to, but we will follow you to hell and back if you convince us it’s worth it. Don’t tell us “because I said so.” Tell us why something is necessary or valuable.
Pastors and parents, this is just as true for you. You are in a position that is under God and pointing to God, but that’s not enough to truly lead. Your children and your congregation don’t follow a position. They follow a leader. Give them reason to follow.